Gaetz, a Trump ally and a lawyer himself, was already facing an investigation revealed Wednesday by The Florida Bar, the state’s attorney discipline regulator, for his inflammatory tweet attack Tuesday on Cohen. On Thursday, a Democratic political action committee filed a complaint with Congress’s ethics watchdog in connection with the same Twitter post of Gaetz.

The tweet had suggested without any evidence that the married Cohen had « girlfriends, » and suggested Cohen confess that to his wife.

Gaetz wrote it the day before Cohen gave damning testimony at the House Oversight and Government Reform committee that painted Trump as a racist con man who had repeatedly broke the law. Because of the timing of the tweet, Gaetz was accused by many people of engaging in witness tampering. 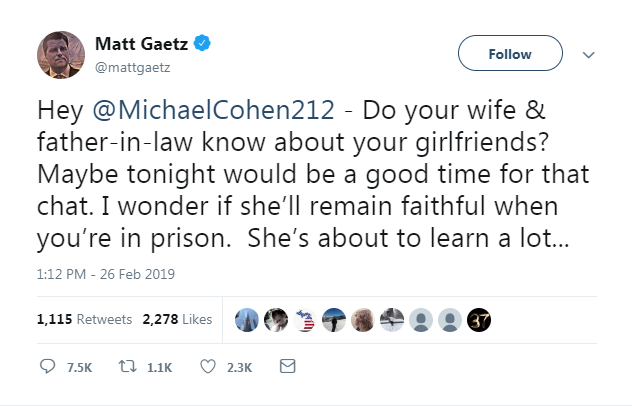 House Speaker Nancy Pelosi, D-Calif., then issued a statement encouraging all members of Congress « to be mindful » of comments on social media that could harm committees’ ability to get truthful information from witnesses.

Gaetz removed the tweet hours after posting it and apologized on Twitter for having written it, saying that while he wanted to « create context around the testimony of liars like Michael Cohen, » it « was NOT my intent to threaten as some believe I did. »

« I should have chose words that better showed my intent. I’m sorry. »

The tweet had mentioned Cohen’s imminent, three-year prison term, which he is due to begin serving May 6.

On Wednesday night, after Cohen had finished his testimony at the committee, Gaetz posted another tweet:

On Thursday, the Democratic Coalition, a political action committee, said it had filed a complaint against Gaetz with the Office of Congressional Ethics that alleges the congressman’s tweet violated federal criminal law, the House Code of Official Conduct, and House rules.

The Democratic Coalition’s complaint says, « In threatening to expose embarrassing facts about Cohen on the eve of Cohen’s public testimony about criminal activity involving Donald Trump, Gaetz engaged in an attempt to intimidate a witness, an attempt to obstruct justice, and an attempt to interfere with the proceedings of the House of Representatives. »

« Gaetz’s threatening and intimidating tweet at Cohen was a criminal and unethical act that did not reflect creditably on the House in violation of Clause 1 and otherwise violated the spirit and letter of the Rules of the House. »

A spokesman for the Congressional Ethics Office declined to comment to CNBC about the complaint.

The office does not necessarily act on complaints filed by outside parties. But it will conduct a probe of a member of Congress if credible allegations are raised against them.

However, the office’s board has not yet been appointed by Pelosi and House Minority Leader Kevin McCarthy, R-Calif., so no probe into Gaetz can begin at the moment.

Gaetz’s spokeswoman had no immediate comment on the complaint by the Democratic Coalition.

On Wednesday, during Cohen’s testimony, Rep. Stacey Plaskett, a Democratic from the Virgin Islands, told Cohen, » I want to apologize for the inappropriate comments and tweets that have been made by other members of this body. »

« And as a former prosecutor, and as former counsel on House ethics, » Plaskett said, « I think that at the very least there should be a referral to the Ethics Committee of witness intimidation and tampering under [U.S. Criminal Code section] 1512 of my colleague Matt Gaetz, and it may be, possibly, him being referred for criminal prosecution. »